To help accommodate the growing numbers of pauper lunatics requiring treatment in the West Riding of Yorkshire, the South Yorkshire Asylum, much later known as Middlewood Hospital, was opened at Wadsley near Sheffield in August 1872.

Four years earlier the West Riding Pauper Lunatic Asylum had rented a large property, Mount Pleasant in Sharrow Lane, Sheffield which had been run as an annexe housing 75 patients. These patients were among the first removed (transferred) to take up residence in the new asylum. By the end of 1872, over 250 patients, all chargeable to the poor law Unions in the south of the Riding – Sheffield, Worksop, Eccleshall Bierlow, Rotherham, Wortley, Penistone, Thorne and Doncaster – had been removed from Wakefield to Wadsley, freeing up significant accommodation in that asylum. This movement of patients between asylums would continue throughout subsequent years as the West Riding authorities tried to cope with the ever rising demand for asylum beds.

For the genealogist, Sheffield Archives in Shoreham Street, Sheffield holds the surviving patient records for the South Yorkshire Asylum. Unfortunately, only patient admission registers exist for the period 1872 – 1915. Thereafter I am led to believe that patient case notes do exist but I have been unable to view those myself because of the 100 year restriction on access.

Some seven years ago, enthusiastic volunteers from Sheffield and District Family History Society undertook the transcription of the early admission registers covering 1872 - 1910. Their transcriptions have since been made available to researchers through Sheffield Archives website where you will find four downloadable PDF files organised alphabetically by patient’s surname, acting as the index to the actual admission registers.

More recently, the great work done by the Sheffield team has found a wider audience through the subscription website Findmypast where the 17,368 admission records have been made available under “Hospitals” in “Institutions & organisations”. Anyone searching for an ancestor might well find a record suggesting that they had been a patient in the South Yorkshire Asylum.

There is however a catch. The original admission registers have been accurately transcribed including the “age” of the admitted patient. From that age, a “birth year” has been calculated which is also shown in the Findmypast record although no birth year is shown in the original admission register. We genealogists use that birth year when trying to verify that we have got the right person so tend to place a great deal of store by it. For any patients admitted directly into the South Yorkshire Asylum their age on admission will allow a sensible estimate of their birth year to be calculated. The catch is that where a patient had been removed from Wakefield, the “age” recorded in the South Yorkshire Asylum admission register was actually their age on the date of their original admission to Wakefield.

For example, cutler William Roberts was admitted to the West Riding Pauper Lunatic Asylum, Wakefield in 1852, aged 40. I researched William’s case for my book Proper People and found that he had been removed to the South Yorkshire Asylum in 1872. The admission register entry for that institution has been correctly transcribed and appears on Findmypast as follows: 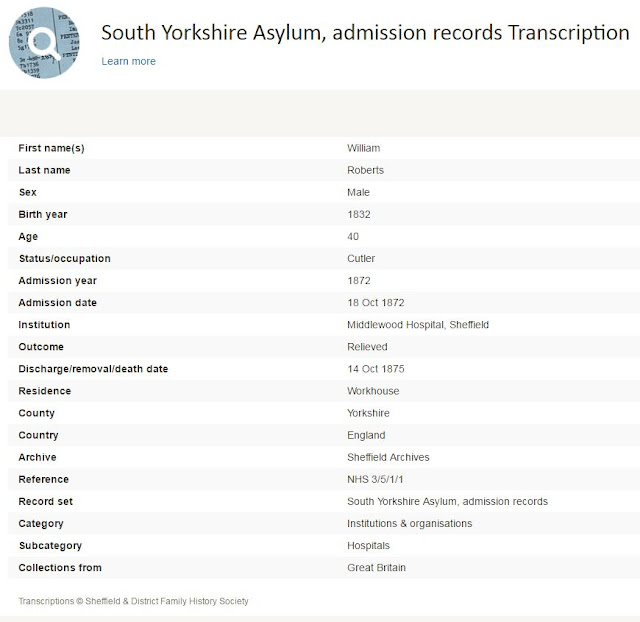 William’s age is shown as 40, his age on admission to Wakefield in 1852, so his real birth year was circa 1812. The actual year would depend on his date of birth which is why it is always a good idea to use +/- 1 year when carrying out online searches. The birth year shown here, 1832, is out by 20 years, long enough for another family generation, so having the real potential to confuse the researcher.

Other patients who appear in Proper People and were removed from Wakefield to Sheffield include Patrick GANNON, Alice BROADBENT and Charles WILCOX. Their birth years have been understated by 18, 20 and 31 years respectively. My guess is that 5 – 10% of the earlier Sheffield admissions will be for patients removed from Wakefield so are highly likely to show an incorrect age and birth year. 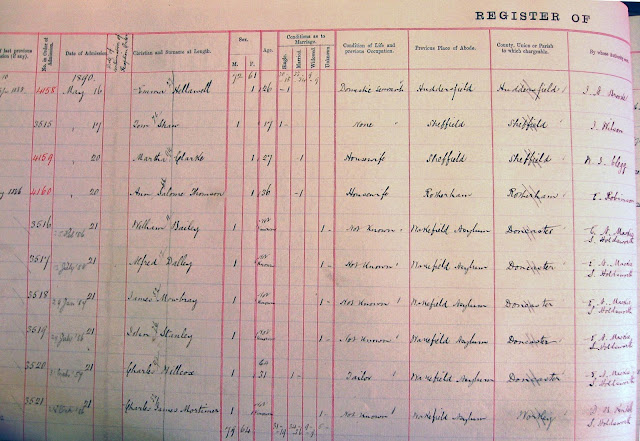 This is an odd situation as nobody has actually made a mistake. The admission records had been faithfully transcribed and the data held on Findmypast is a true copy of those transcriptions.
When I brought this curiosity to the attention of Findmypast their response was that they accept transcriptions from third parties in good faith and that I should take the matter up with the data owners, Sheffield and District Family History Society. I did indeed discuss this with a very helpful lady from the society and she was surprised to learn of the "problem". I understand that she is due to discuss the matter with Sheffield Archives with a view to perhaps including a warning that there is misleading data in some of the admission register entries. I would have thought that Findmypast should also publish a similar warning for its paying customers.

Without my having conducted research into asylum records in both the Wakefield and Sheffield Archives this oddity might never have come to light. The challenge now must be to identify all the hundreds of patients removed from Wakefield to Sheffield and establish their correct age, thence birth year. Some of those patients records hold a clue as, just in the case of Charles WILCOX above, their Previous Place of Abode shows Wakefield Asylum, but this is not consistent throughout the record set.

Any fortunate family historian coming across an ancestor in Sheffield who had been removed from Wakefield will have the added bonus of being able to access their pre Sheffield case notes which will be held by West Yorkshire Archive Service (WYAS) and those may just contain a wonderful old photograph, as I found in the case notes of William ROBERTS above.

Note that WYAS is currently closed but reopens in a fantastic new building, the West Yorkshire History Centre, on 13 February, 2017.
Posted by David Scrimgeour at 13:30