Some weeks ago Yorkshire's national newspaper, The Yorkshire Post carried an article entitled "Mental health of students 'may suffer from fast-track degrees'. Plans to introduce two year degree courses had been criticised by university chiefs, teaching unions and student representatives for threatening the mental health of students.

While researching asylum records at the new West Yorkshire History Centre in Wakefield an entry in an Admissions Register had caught my eye. Committed to the West Riding Asylum on New Year's day 1878, 20 year old Hartley Bracewell BARKER from Bingley had been suffering with mania for four months and was in weak health. His occupation was given as "Pupil Teacher" and the supposed cause of his insanity was "intense study". Hartley was discharged, recovered the following November. 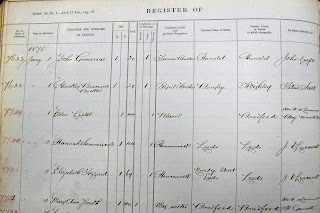 What had caught my eye in the admission register was the well known name of the magistrate who had signed the legal paperwork to commit Hartley to the asylum in 1878. Thirty five year old Titus Salt, DL JP was the youngest son of Sir Titus Salt, 1st Bt. of Saltaire fame.


All was not well though as we can find Hartley in the 1891 census, now aged 34, living at home with his 64 year old widowed mother Alice, a grocer, in York Street, Bingley. The final column of the census return for Hartley contains the single word "imbecile".

No entry could be found for Hartley in the 1881 census so where could he have gone? Checking Ancestry's UK, Lunacy Patients Admission Registers, 1846-1912, I discovered that Hartley had been readmitted to the Wakefield Asylum in September, 1880 and spent the next nine years there before being discharged, not improved to return home to the care of his mum.

One final record in that same collection shows Hartley being admitted to Menston Asylum in October 1894. Menston was only seven miles from home so hopefully Alice was able to visit him. Hartley would spend the remaining 20 years of his life there before his death in October, 1914 aged 56.

"Intense study" had been blamed for triggering Hartley's chronic mental illness some 140 years ago. It certainly happened back then and I'm sure that the threat still exists today. Hopefully, with appropriate mental health support, sufferers can receive early help and avoid Hartley's fast-track to a lifetime of chronic illness.

Posted by David Scrimgeour at 14:33