Some weeks ago I was delighted to accept an invitation from David Burgess, Yorkshire West Regional Representative for the Guild of One Name Studies to speak at the Yorkshire regional meeting on 18 March in Wakefield. It seems very appropriate that I will be presenting “Early Asylum Life” in Eastmoor just a stone’s throw from what remains of the West Riding Pauper Lunatic Asylum. 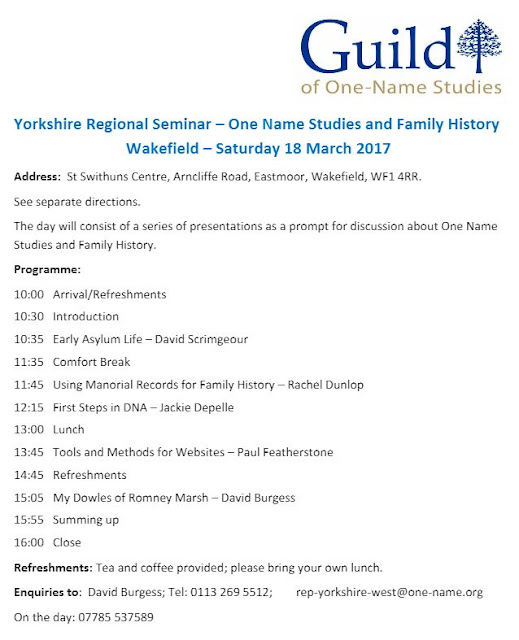 I’ve been a member of the Guild for some years although to date I’ve decided not to pursue a study of all Scrimgeours worldwide. My hands have been full just mapping out my own ancestry. What has been of great value has been learning from other researchers many of whom have carried out significant studies spanning many years.

This meeting gives me another opportunity to tell fellow family historians about the great material to be found in asylum records. I found myself wondering how many of the potential audience could benefit from a dig around in asylum archives. With help from David Burgess, who was able to give me a list of 121 surnames being studied by our Yorkshire members and those from other parts attending next week, I have been able to carry out a bit of research to answer that question, with surprising results.

My first review involved matching that Guild list with the transcribed lists of West Riding Pauper Lunatic Asylum (Stanley Royd Hospital) discharges on the Yorkshire Indexers website. Nine pages contain 11,445 records, each representing the admission/discharge of one patient. That is only about one third of the total patient admissions 1818 – 1904 but still a significant sample. Thirty three Guild surnames appear in those records:

Once duplicated first names are removed there are 94 discrete names of people who could be of interest. Being Wakefield patients there is a very high probability that case notes and committal papers survive which will provide significant information about the patient and their families and maybe even photographs.

The second review was undertaken by matching the Guild list with the indexes of admissions to the South Yorkshire Lunatic Asylum which opened at Wadsley near Sheffield in 1872. I used the PDF versions available from Sheffield City Archives. Nineteen of the surnames identified above were also in those indexes but I also found the following 17 additional Guild surnames:

Once duplicated first names are removed there are 148 discrete names of people who will be found in Sheffield Archives. Some may also be found in the Wakefield asylum records as patients were moved between the two asylums. Unfortunately case notes and committal papers have not survived for pre 1915 patients so you are only certain of finding the limited information in the admission registers.

My final exercise involved searches on Ancestry’s UK Lunacy Patients Admission Registers, 1846 – 1912. I only used the surnames on the Guild list which had not already featured above. As those registers recorded admissions to all county and private asylums across the country, I was able to find nearly all of those remaining surnames.

Surnames marked with * belong to patients admitted to Stanley Royd, Wakefield outside of the years covered by the first matching exercise.

Surviving material will vary depending on the asylum housing the patient.

In summary, over 90% (110 from 121) of Guild list surnames being studied by Yorkshire Guild members were also the surnames of lunacy patients held in Wakefield, Sheffield or elsewhere throughout the 19th and very early 20th centuries. That represents a small mountain of information to dig through looking for those nuggets that could open up fresh lines of enquiry or provide answers to missing persons.

Posted by David Scrimgeour at 17:08