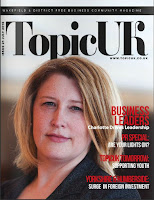 Many thanks to CapitalBMedia for placing another article in the local press. This time there is an impressive two page spread in the Wakefield and District Edition of Topic UK, the free business and community magazine. 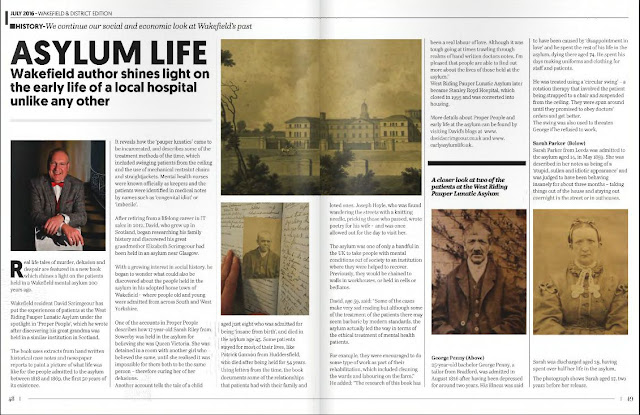 Posted by David Scrimgeour at 10:10

I was pleased to have been able to help out on the Wakefield and District Family History Society stand at the annual Yorkshire Family History Fair held in the Knavesmire Exhibition Centre at York Racecourse on Saturday 2nd July. This was also an opportunity to promote my book Proper People which sold well confirming my belief that many family historians also have a wider interest in social history.

﻿﻿
Our stand was ably manned by Richard Bailey, myself and my fiancée Amanda Crossley who did a sterling job at what was her first family history fair.
﻿﻿
From the many conversations I had on Saturday it is clear that family historians are beginning to realise that asylum records may provide the answers to some of their brick walls or missing people.

Ancestry have recently published the records of the Commissioners in Lunacy which should show all  patient admissions across all asylums in the UK after January 1846 so one might expect to find a lunatic ancestor within that database. Have a look at my Early Asylum Life blog post Searching for Early Asylum Ancestors for comments on my experience of searching for patients using Ancestry which was actually much better than I had expected.

Consider the census which is one of the key resources used by family historians. The 1841 census return for the West Riding Pauper Lunatic Asylum is much as one would expect for any other institution. It records all the staff, some living with their families, and all the patients are named in full.

Thereafter, from 1851 to 1901, while staff and their families are named, the patients are only identified by their initials. This might look like an early form of data protection but I suspect it had more to do with reducing the clerical effort. Not all asylums adopted the practice of using just the patients' initials.

In 1911 full names of patients are again recorded leaving a gap of 60 years during which a Yorkshire  ancestor may well have disappeared into the West Riding Pauper Lunatic Asylum. More about how to search for your ancestors another day.

Posted by David Scrimgeour at 10:16

Delighted to have been invited to yesterday evening's preview of two new exhibitions displayed at the Mental Health Museum, Fieldhead, Wakefield.

All Our Stories is the work of 2nd year history students from the University of Huddersfield who have created ‘story guides’ for the museum’s displays  - real people’s stories that help to tell the complex history of mental healthcare in the UK from the 19th century through to today.

Do Eagles Paint? scratches the surface of the complex debates about intelligence and ability testing. Using unique and intriguing objects associated with these tests, the exhibition aims to question their fairness, cultural bias, context, effectiveness and consequences.

Congratulations to curator Cara Sutherland and her volunteers including Alison Moreton who was largely responsible for Do Eagles Paint.

One eagle who certainly doesn't paint is Elvis, the museum's nickname for the polished wooden eagle lectern carved according to the museum caption by an "unknown" Asylum patient in 1869-70. It was used from then until the closure of St Faith's chapel in the grounds of the former West Riding Pauper Lunatic Asylum.
﻿
﻿
Those of you who have read my book Proper People will know by now that the craftsman behind Elvis is no longer an "unknown" patient. More about Lachlan McKenzie and Elvis in a later post.

Posted by David Scrimgeour at 12:01