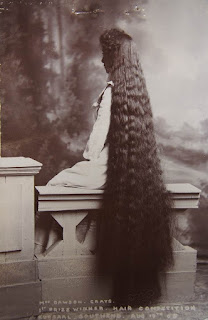 Today is “Hairy Archive” day in this year’s Explore Your Archive campaign. Archivists across the country have been scouring their collections to tweet examples of unusual references to hair and illustrations or photographs of hair or hairy things which can be found in their archives. Examples have included this photograph submitted by The National Archives of a Mrs Dawson from Grays, Essex who won 1st Prize in the Hair Competition at an amusement park known as the Kursaal in Southend-on-Sea, Essex on 19th August, 1908. Her hair must be all of 5 feet long.

Victorian gentlemen feature on many of the tweets, sporting impressive beards and moustaches so there is a preponderance of well groomed, male facial hair.

Casebook F5 in the West Riding Pauper Lunatic Asylum archives held by West Yorkshire Archive Service, Wakefield holds something hairy and different dating from 1843. Sadly no photographs at that time and no illustration so I’m stealing a few paragraphs from my book Proper People where I write briefly about one of the patients, including a transcription of her physician’s entry in her case notes.

December, 1843. Face pale, features coarse and strong, chin covered with a beard 9 or 10 inches long, which she wraps up in curl-papers: she is demented and deluded, has a most violent temper and noisy tongue if anything irreverent is said of her beard on which she prizes herself.

So it not just well-groomed male facial hair which can be found in our archives!
Posted by David Scrimgeour at 15:17