Many years ago, I decided it was time to research my father Malcolm's side of my family. He and my mum had divorced in the very early 1960s after a separation. As a baby I had no recollection of Malcolm. Strangely, I felt guilty about doing that research but when I spoke to my mum about it, she told me that she had fully expected me to want to know more about  my father's family.

By the late 1990s I knew where Malcolm lived.  I found myself in Leicester on business. I drove down Shipley Road past his house but did not have the courage to stop and knock.

Malcolm died in 2004. Five years later, with the explosion in genealogical stuff available on the internet I was able to establish his second marriage to Sheila. With that I was able to do a search on Mother's Maiden Name which led, literally, to a jaw dropping moment when I discovered that I had three half siblings, Michelle, Richard and  Karen.

At the Scrimgeour Clan Gathering in St Boswells I met my brother Richard for the first time ever. Same dad, different mums. 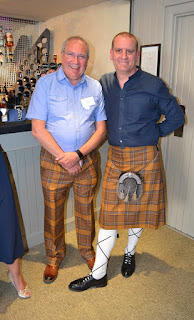 Extraordinary experience, but it was as if we had known each other for years. We had even chosen the same unusual "muted" Scrimgeour tartan at different times of our lives. Feels very, very nice to no longer be a single kid.
Posted by David Scrimgeour at 08:56